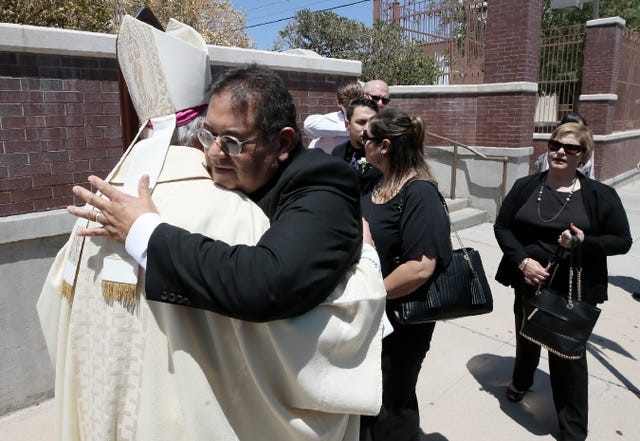 Gilbert Anchondo (pictured above with Bishop Seitz following his son's funeral in 2019) and his wife, Brenda, had been caring for their 1-year-old grandson, Paul, since their son and daughter-in-law were killed shielding their infant son during the August 3, 2019 Walmart mass shooting. Gilbert Anchondo suffered a fatal heart attack on February 17 at the age of 60 and was laid to rest today.

Bishop Mark Seitz presided over Mr. Anchondo's funeral Mass and has accompanied the family through all of these painful losses, like the priests in the Diocese of El Paso who have been with their parishioners during the pandemic, visiting them at the hospital, administering last rites, helping them through grief and commending their loved ones to God with funeral Masses and burials.

Gilbert Anchondo was the father of Andre Anchondo and father-in-law to Jordan Anchondo. Both were killed during the mass shooting after protecting their baby from the gunfire. Gilbert's final wish was to be buried next to his son, Andre.

Son Gilbert Anchondo shared, “I think maybe my brother needed him and that’s why this happened,” said Anchondo. "I think my dad has more faith than maybe a priest. I don’t know if I can say that but he was somebody incredible,” said Anchondo as he looked at the walls of his father’s office covered in photos of his family.