Sharing the Blessings: The Gift that Keeps on Giving 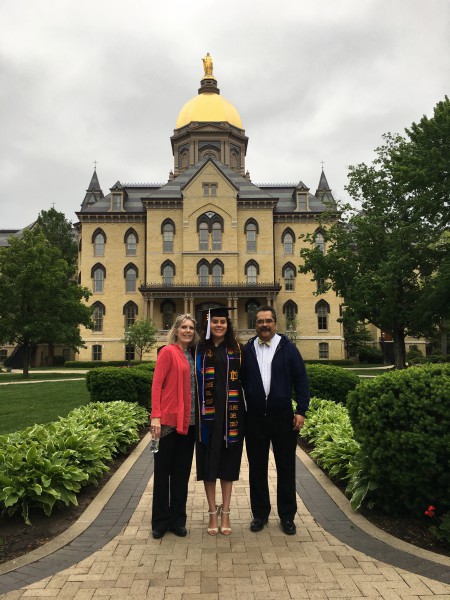 Manny and Maureen de la Rosa are synonymous with Stewardship.  They give of themselves constantly and in every way that God calls them to.

The parents of six children, Manny and Maureen have been together since their university years at Notre Dame.  Manny says that he would not have made it through his Pre-Med Chemistry classes without Maureen who has a master’s degree in the subject.

The devoted couple were fully prepared to pay for law school for their fifth child, Mercedes, when something remarkable happened.  Their daughter was invited to interview for a fellowship with a Milwaukee law firm, one of only six students chosen to interview.  The Godfrey and Kahn Law Firm would pay for all three years of law school at Marquette University and provide mentorship as part of the fellowship.  The interview went very well and Mercy was accepted. Maureen refers to the law firm as GODfrey and Kahn.

The devoted Mom and Dad knew there was only one thing to do: give the $150,000 they had set aside for law school to the Church “because, after all, it’s His to share.”  In 2017, they reached out to the Foundation to discuss their philanthropic plans and prayerfully chose to donate to their two passions, the Seminarian Education Endowment Fund and Catholic Schools.  Manny, Maureen and their daughter all say they felt God’s presence and guidance directing Mercy’s path.


Mercy, a graduate of Notre Dame University who wanted to be a social worker until a mentor pointed out she would make an incredible attorney, is passionate about helping people.  It's easy to understand how her parents would have done anything to support her. She's bright, dynamic, engaged and focuses all of her energy on giving to others and making the world a better place. Three years after this journey began, Mercy has a law degree from Marquette University and works as a Wisconsin Assistant Public Defender.  She's part of a thriving parish community, devoted to her faith, and following in her parents’ footsteps to live a life of service.