Love is Our True Destiny 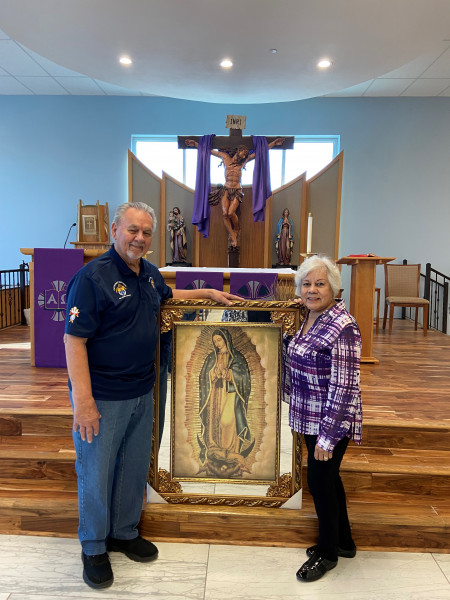 Jim and Alice Weber, longtime parishioners at St. Patrick Cathedral, donated an image of Our Lady of Guadalupe to San Pedro de Jesús Maldonado Parish. They received a blessing from Father Germán Alzate, Pastor of San Pedro and Director of Vocations. The couple will celebrate 60 years of marriage on May 12, 2022.

In April of 1962, Jim was at the Army vs. Texas Western College basketball game as a member of the Army team. He wasn't playing against Don Haskins that night because he had a sprained ankle. Alice caught his eye and he asked her out. She said it was Holy Thursday and she had to go to church. Jim was in. And he would take her friend along too. Fourteen church visits later—Jim wasn't a Catholic yet—he asked her to go to the movies with him.

The first date for James Weber, a native of Cicero, a suburb of Chicago, and Celia Alicia Cienfuegos, one of five daughters, was that same day at midnight. They watched West Side Story, a movie about two young people from rival New York City gangs who fall in love. Alice's traditional father wouldn't let Jim in the house unless he had a proposal of marriage. Her mother, a domestic for wealthy Jewish families, welcomed him in when Dad wasn't looking.

Three weeks later they were married on a Saturday by a Justice of the Peace behind a gas station in Clint with one other couple. A priest and a Catholic church were out of the question until Jim converted. One year after they met, they received the Sacrament of Marriage at St. Pius X.

Jim and Alice serve in any way they can and they always do it humbly, with great love, and together. Alice had an impressive civil service career and Jim retired from American Airlines. They raised four children and count their family as their second biggest blessing after their faith.

On January 16, 2009, Alice's 72nd birthday, they welcomed a granddaughter named Kaitlyn. She had been in the NICU for 47 days when the doctors told her parents they did not think Kaitlyn would make it through the day. Father Rick Matty would return Jim's phone call request to anoint the baby just as they were nearing the area of St. Patrick Cathedral, and Jim, Alice, and Father Matty went to the hospital together. When Father Rick anointed Kaitlyn with holy oil, her numbers started to improve and from that day forward she began to heal. The family prepared themselves for big health issues and developmental delays but Kaitlyn grew into a healthy young girl who is only hard of hearing.

Jim shared, "We took her to Mass with us when she was visiting. She doesn't attend a Catholic church at home but she was enjoying it and following along. During the celebration, she looked up at the Sacred Heart of Jesus and said, 'I know him.'"

"Life has given us many experiences—cancer, grandchildren born premature, the tragic loss of our son-in-law at 41, yet life is good as our Lord sustains us", said Alice.

Jim and Alice are looking forward to honoring the legacy of Father Rick Matty at the 16th Annual Foundation of Faith Event: Building the Kingdom. Father Matty is receiving the 7th Annual Dei Gratia Award. Father Matty's family will accept the award on his behalf.

The Our Lady of Guadalupe image donated by the Webers will be placed in a room dedicated to prayer and religious formation at San Pedro de Jesús Maldonado Parish.

"Love is our true destiny. We do not find the meaning of life by ourselves alone - we find it with another." — Thomas Merton, Trappist Monk