Donate to a Fund Parish Endowments

Immaculate Conception Church, planned and built by Father Carlos Pinto, S.J. in1893, is a landmark of the downtown El Paso landscape. In 1977, the church became home of the Diocesan Apostolate for the Deaf with a Sunday noon Mass signed for the hearing impaired. This fund helps support the life and programs of the parish.

Father Carlos Pinto, S.J. planned and built Immaculate Conception Church in June 1893 as the sister church to Sacred Heart. The rectory was finished and the Altar and Rosary Society established in 1901.

The first meeting of the Knights of Columbus in the state of Texas was held in Marquette Hall, located in the basement of Immaculate Conception Church, in February 1902.

When the Diocese of El Paso was created in March 1914, Immaculate Conception became the Provisional Cathedral until the opening of St. Patrick in 1917.

In 2014, Immaculate Conception renewed celebration of the usus antiquior, the traditional Latin Mass, at a church and on an altar that were erected when this liturgy was ubiquitous in the life of the universal Church.

To this day, Immaculate Conception continues to be a landmark of the downtown landscape. 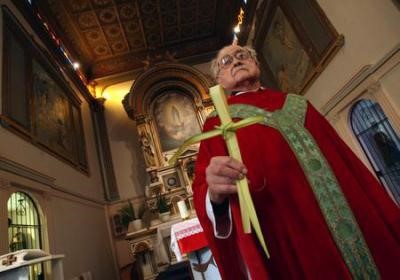 The late Rev. Msgr. William H. Ryan left a gift in his estate for the Foundation to create a fund for Immaculate Conception that will ensure the parish will have the necessary resources for building care and preservation in perpetuity.


As a result, endowed funds provide a perpetual, supplemental source of income for such things as the enhancement of programs and ministries, facilities maintenance, scholarships and seminary assistance, priest retirement, etc. Learn more about endowed funds.

Monthly giving is a powerful way to provide sustainable, long-term support. As little as $20 (66 cents a day) can make a difference for the people helped by the parishes, schools, ministries, and charities in the Diocese of El Paso.

Set Up a Monthly Donation

Creating a bequest in your will for the Catholic Foundation for the Diocese of El Paso is a powerful statement in your legacy, and costs you nothing today.

Donors may create a Named Fund benefiting the endowed fund of their choice with a gift or pledge of $10,000 or more over a five-year period. If you're interested in creating a legacy in honor or memory of a loved one, contact us online or call (915) 872-8412.