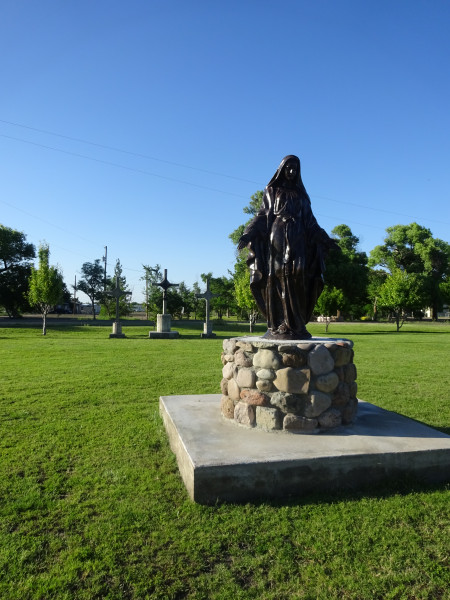 There have been many angels through the years who have supported West Texas parishes through their generosity and service, some of whom are no longer with us. As we celebrate twenty years of the Catholic Foundation, we remember and give thanks.

Countless donors have contributed to West Texas parish funds and the Catholic church in the Diocese of El Paso through their prayer, service, and giving, since the Catholic Foundation opened its doors in 2001. There are just too many to mention, so we thought we would highlight a few here in celebration of our 20th anniversary, and in thanksgiving for our West Texas communities.

Leroy and Rose Baeza were honored with the Catholic Foundation's 2nd Annual Dei Gratia Award in 2016. Leroy is a founding board member of the Catholic Foundation. He and his wife Rose, married for 61 years in 2021, served God faithfully while raising two sons and one daughter, and building a successful family business. One of the most accomplished Hispanic businesses in the area, the family took a small “Mom and Pop” grocery store in Fort Davis, established by Leroy’s father, Dolores ‘Lolo’ Baeza in the late 1960’s, and built an area-wide company with supermarkets in Alpine, Presidio, and Fort Davis. To thank their customers in West Texas, and as good stewards of their Catholic faith, Leroy and Rose established endowed funds for the permanent care of churches in Fort Davis, Presidio, Alpine, and Marfa. "The people in these communities were very good to me and my family," Leroy said, "and we wanted to leave a legacy of faith for them".

Dorothy O’Donnell Perryman set up an endowed fund for her beloved parish, Our Lady of Peace in Alpine, in 1978, 23 years before the Catholic Foundation was established. Year after year, she contributed, and, in 2008, her fund of $113,000 was transferred to the Catholic Foundation and the Dorothy O. Perryman Fund for Our Lady of Peace Parish was established.She and her husband, W.H. "Jack" Perryman moved to Alpine in 1944, lured by the opportunity to open a wholesale/retail gas business. Instead, they were recruited to teach and both would devote their lives to education. Dorothy and Jack didn’t have any children so they decided to help the Catholic church, the local Baptist church and Sul Ross State University, by setting up endowed funds for each. Dorothy also made provisions to remember the Catholic Foundation in her will with a gift to endowment so she could help the Church in perpetuity. Mrs. Perryman passed away on May 19, 2019 at the age of 102.

Fr. Trinidad Fuentez, Rector of St. Patrick Cathedral in downtown El Paso, passed away on May 4, 2021 at the age of 69. He had a great love for our Blessed Mother and was a dedicated priest. Fr. Trini was born in Pecos, Texas, on January 10, 1952 to Daniel and Joaquina Fuentez. He was one of 15 children.

Fr. Trini began his studies at St. Charles Seminary with Msgr. David Fierro (St. Frances Xavier Cabrini), and Msgr. Arturo Bañuelas (St. Mark). He went on to major semninary at Josephinum in Columbus, Ohio. Fr. Trini was one of a group of priests who came out of Pecos, several of whom were incardinated to the Diocese of El Paso. Some of the men are religious order priests or incardinated to other dioceses.

He served the Diocese of El Paso faithfully for over 40 years at St. Joseph’s, San Antonio de Padua, St. Joseph Mission in Fort Davis, Christ the King in Balmorhea, Santa Lucia, San Elceario, Most Holy Trinity, Queen of Peace, and St. Patrick Cathedral. He served as a Defender of the Bond at the Diocesan Tribunal, on the Presbyteral Council, Personnel Board and Finance Council, and served as Vicar for several vicariates throughout his priesthood. He was the Diocesan Vocation Director for six years, and was loved and respected by his brother priests.

We are grateful for the gifts of prayer, service, and giving from each and every person from our West Texas communities. As part of our 20th anniversary celebration, we're inviting you to give "Gift of 20" in 2021 to your favorite endowed fund. Consider a gift to the West Texas parish fund of your choice. There are four levels of giving to choose from: Saint (one-time gift of $20,000); Blessed ($1,000 for 20 months); Servant of God ($100 for 20 months); and Prayer Warrior ($200 gifts). Gifts go to permanent endowed funds that will provide support in perpetuity. Name your fund in honor or memory of a loved one, a beloved priest like Fr. Trini, one of your angels in heaven, or your patron saint.