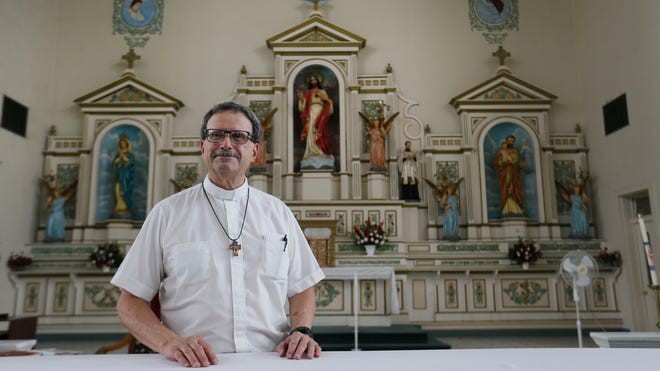 Executive Committee members of Restore Sacred Heart Church are Bishop Mark Seitz, church leaders, elected representatives, and professionals specializing in architecture, history, historic preservation, and related fields. The Executive Committee is co-chaired by Father Rafael García, SJ, Pastor of Sacred Heart Church, and Dr. Max Grossman, a professor at The University of Texas at El Paso. Professionals and residents of the Segundo Barrio, strong supporters of the cause, make up the Advisory Council. The volunteer group will apply for the necessary grants and tax credits, raise funds, and oversee the restoration process from the solicitation of architectural bids through the completion of all work.

Rev. Carlos M. Pinto, S.J., an Italian immigrant from the Naples Province, arrived in El Paso in 1892 after he and a group of prominent Jesuits fled the 1860 Revolution and headed for the American West to serve as missionaries. They would lay the foundation for what is today the Catholic Diocese of El Paso. Fr. Pinto was made superior and eventually came to be known as the "apostle and masterbuilder of El Paso." He immediately set about establishing two churches to meet the language, cultural, and religious needs of the English and Spanish-speaking Catholics, who were primarily Mexican immigrants. Sacred Heart Church and the "sister church", Immaculate Conception, which eventually became the provisional Cathedral in 1914, were completed in June, 1893. The Jesuit residence was added in 1898 and expanded in 1911 to serve all area Jesuits. A second floor was added to the school in 1899. The current church replaced the original building in 1928-29. Under the leadership of Fr. Pinto, the Jesuits built 14 churches and seven schools between 1892 and 1917. Sacred Heart and Immaculate Conception are the oldest Catholic churches in the City of El Paso.


Sacred Heart Church continues to be an anchor in the historic neighborhood called the Segundo Barrio and the Jesuits continue to serve and minister. Throughout the years, the church has served the community’s spiritual needs and reached beyond that by providing services and opportunities for individuals seeking to improve their lives. Along with the Jesuit community and many friends, benefactors and volunteers, the church has been able to respond to the needs of the area. The Social Service Center provides various weekly adult classes, Catechism classes prepare the youth to receive their sacraments, and Project Gabriel and St. Vincent de Paul help those who find themselves in crisis.

The restoration of Sacred Heart Church is a unique, significant, and impactful project for the soon-to-be realized Segundo Barrio National Historic District, the community at large, and the state of Texas. The Catholic Foundation invites you to be part of this historic event.

You can contribute with a credit card on our website or mail a check to Catholic Foundation, 499 St. Matthews Street, Building G, El Paso, Texas 79907, Attn: Restore Sacred Heart Church. For more information and to discuss other ways to give, please contact Major Gifts Officer Sofía Larkin at slarkin@catholicfoundationelpaso.org, 915-872-8412 or directly at 915-433-2003.