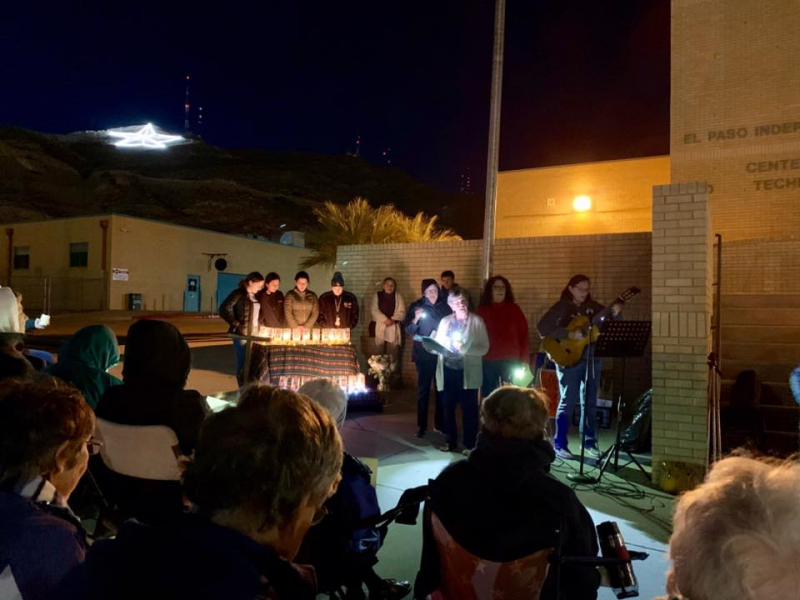 Women serve throughout Christ’s church around the world exalting God in countless ways, from educating our community’s children to leading charitable initiatives. In recognition of their unique contributions during Women’s History Month, we are recognizing one of the Diocese’s volunteer leaders working with the Peace and Justice Ministry supported by the Progress: Catholic Ministry Appeal 2021: Pat Delgado, Coordinator of the Steering Committee for Restorative Justice for the Peace and Justice Ministry.

For John Mason, who directly benefited from the Ministry after being released from a 24-year prison sentence, Delgado was a lifeline. “After I was released, I had nothing,” he said. “I needed food, clothes, a job. They helped me find work, they connected me to resources. But more than that, they showed me love. They gave me a family and another chance. They brought kindness back into my life. That love saved me. (Delgado) is an angel.”

Delgado began volunteering almost ten years ago with El Pasoans Against the Death Penalty. Five years ago, she was contacted by Marco Raposo, Director of the Diocesan Peace and Justice Ministry for the Diocese of El Paso. Raposo’s vision was to create a Restorative Justice component that would encompass victims of crime, offenders and the community. “When people first hear about Restorative Justice, they think it’s too easy on the offender, and doesn’t offer justice for the victim,” she said. “Incarceration and how we handle justice affects our community as a whole. (The United States) has such an outsized prison population compared to other countries. And we focus on being punitive, not on rehabilitating the offender. That doesn’t solve crime or the problems of poverty that leads to mass incarceration.”

Marco Raposo, Director of Peace and Justice, said that Delgado is a one-of-a-kind volunteer, one who gives from the heart with passion. Because Raposo is the only paid staff member for the Ministry, he calls Delgado’s volunteer service invaluable. “Pat Delgado—wow!,” he said. “What can I say about her? She is incredible. If she wasn’t there, I don’t know what I would do. She doesn’t see herself that way. She doesn’t realize how special she is, but she connects people to the work we do, and does it in a way that is so inspiring.”

Restorative Justice focuses on restoration, forgiveness and rehabilitation. In Delgado’s role, she assists with the creation of Restorative/Criminal Justice Ministry Teams in the parishes within the diocese. “The more I have learned about restorative justice, the more it makes sense,” Delgado said. “It’s much better for society. It costs less and focuses more on mental health and poverty issues as well as keeping juveniles out of the system.”

The philosophy also emphasizes forgiveness and retribution. “When you open yourself up to forgiveness, it is healthier for everyone,” Delgado continued. “It ties so beautifully to the parables of Jesus. This work has changed the way I read Scripture even. It has made me realize that Jesus was about restorative justice. He was not focused on judging, but rather on healing. It makes the life of Jesus so much more relevant, and I want to bring that awareness to everyone.”

People can support the work of the Peace and Justice Ministry through various ways, said Raposo. Opportunities range from visiting offenders in prison to working with families or victims, donating in-kind goods or contributing financially, assisting released offenders with re-entry such as reviewing resumes or helping to prepare for job interviews. Volunteer opportunities can occur at the parish level, a group or an individual level.

“One of the misconceptions is that people think that they only volunteer in the prisons,” he said. “But there are many different opportunities to serve, including one-time opportunities like donating to the Angel Tree during Christmas and other times of need, where we may do things like buy Christmas presents for the children of those incarcerated. We call our volunteers ministers because this an answer to the baptismal call.” Delgado agrees. “We have to be there for one another, and we have to do it with love and compassion in our hearts,” she said. “Almost everyone has been touched by the criminal justice in some way. And we don’t always talk about it in our parishes because of the stigma and shame. So people suffer alone in shame because of their loved one that is incarcerated or because they themselves were. Victims also suffer in silence often. We need to embrace all of them.”

Mason credits the Ministry in large part with being able to turn around his life around. After years of drug and alcohol abuse, gang activity and violence, he has established a stable family life, acts a volunteer and regularly attends church. He has been sober for more than six years. “I learned that there was another way that I could be different,” he said. My life is beautiful now. God has blessed me. I have a wonderful relationship, and two kids. But if it wasn’t for Restorative Justice, I wouldn’t be alive today. I felt so alone before they came into my life. Now, I have everything.”

With additional funding, Delgado and Raposo dream of spreading the message of love, forgiveness and hope, further using donations to conduct outreach to juvenile offenders, train ministers, provide additional support to program clients, offer spiritual guidance, reimburse ministers for expenses such as mileage and raise awareness of the issue.

“The current justice system is very biased against the poor and minorities,” Delgado said. “And that’s especially true about the death penalty. It is a throwback to slavery and lynching. It has deep roots in racism. That doesn’t mean that offenders are off the hook. They need to be held accountable and provide restitution. But we also don’t have to focus on locking people up and breaking them down.” In the end, Delgado said, it is about love and wholeness. “Forgiveness and reconciliation is what leads to healing,” she said. “Imagine what our society could be if we made that the cornerstone of our justice system. Isn’t that a world we would all like to live in?”

Click here for more information about the Peace and Justice Ministry. Make a donation to the 2021 Progress Catholic Ministry Appeal or contact the Catholic Foundation at 915.872.8412.