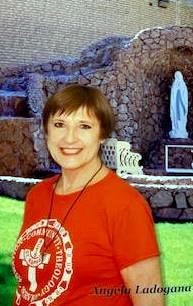 Angela Ladogana, affectionately known as Angie, was as generous after her passing as she was in life. A St. Raphael parishioner, Angie left an estate gift for her beloved parish; Fr. Tony Celino, JCL, Pastor of St. Raphael, used the thoughtful donation to establish a Named Fund for the church in her memory. She lost her valiant battle with cancer on January 26, 2019 at the age of 68. A Mass to celebrate the life and memory of Angie Ladogana will be held at St. Raphael Parish on Saturday, February 15 at the 4pm anticipated Mass. All are welcome to honor her legacy and contribute to her fund.

Angela Elizabeth Ladogana was born in Barletta, Italy to Francesco and Vincenza Ladogana. As a child, she attended Mass celebrated by Saint Padre Pio. It made an impact on the young girl and gave her a foundation for a lifelong devotion to her Catholic faith. At the age of seven, Angela and her family emigrated to New York. She would go on to receive degrees from Hunter College and Yeshiva University, a Ph.D. from the University of Texas at Austin, and a postdoctoral degree from Alliant University. Dr. Ladogana was a licensed psychologist in the state of Texas and prior to establishing her private practice in El Paso, she was a YISD school psychologist.

Angie worked tirelessly as a volunteer for numerous organizations, including St. Raphael Parish ministries—Catholic Daughters, ACTS, Eucharistic Minister—loved to decorate the church for Easter and Christmas, supported Jennifer Ann’s Group, and had a passion for the Sisters of Franciscan Missionaries of Mary and the Sisters of Charity. She was known as someone who loved easily, was a loyal friend, and loved to dance and garden.

St. Raphael Parish was established as a mission of St. Pius X Parish in 1966 after a census revealed 800 Catholic families living in east El Paso and the first church, now the parish hall, was constructed that year. It was decreed a parish on August 15, 1967 by Bishop Metzger. Rev. Richard J. Arlt was appointed the first resident priest beginning on December 1, 1967. St. Raphael is home to thousands of families from surrounding neighborhoods, including Album Park, Cielo Vista and Eastridge.

Join St. Raphael for a special Mass in memory of Angie on Saturday, February 15 at 4pm. To contribute to the fund, please contact Major Gifts Officer Sofía Larkin at 915-872-8412 or slarkin@elpasodiocese.org.