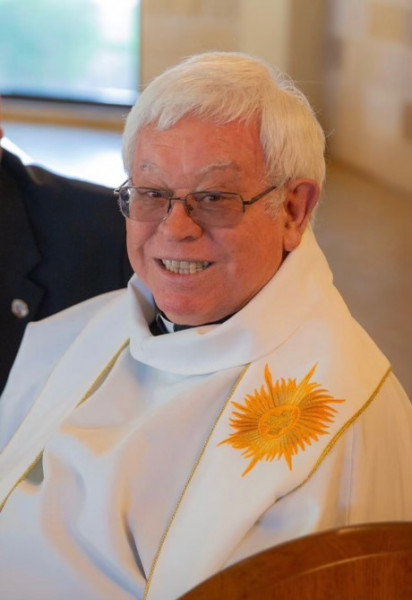 The Catholic community is mourning the loss of Reverend Monsignor David Fierro who passed away on Thanksgiving Day after battling COVID-19.

David Fierro, a native of Alpine, was ordained to the priesthood by Bishop Sidney Metzger, STD, JCD on June 19, 1976. He began his formation at St. Charles Seminary in El Paso with Rev. Trini Fuentez† and Msgr. Arturo Bañuelas (St. Mark), and completed major seminary at the Josephinum Seminary in Columbus, Ohio.

In his 45 years of priesthood, Msgr. Fierro served as vicar, chancellor, rector of St. Patrick Cathedral, rector of St. Charles Seminary, and pastor of parishes across the Diocese of El Paso, including Mother Cabrini and St. Matthew. He was held in high regard by his brother priests and loved by many.

Upon his retirement in July 2021, he said, "Please pray for me and help me pray for more vocations so others will come after me."

The Vigil for Msgr. David Fierro will be held on Wednesday, December 1 at 6pm at St. Matthew. Public visitation will be from 6pm-7pm. Funeral Mass is on Thursday, December 2 at 11am at St. Patrick Cathedral. He will be laid to rest in Alpine. A memorial Mass will be held at Our Lady of Peace Parish (406 S. 6th Street) on Friday, December 3 at 12pm Central Standard Time.

In lieu of flowers, Msgr. Fierro’s wishes were that donations be made to St. Charles Seminary and to Father Yermo Schools.