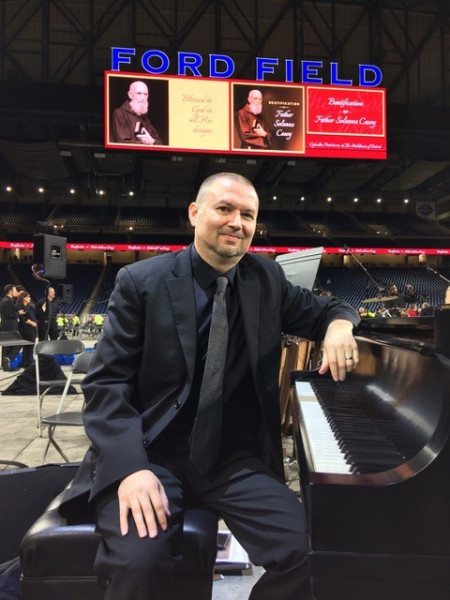 Kolar, a distinguished composer whose music appears in several Catholic hymnals, has led the Diocesan Choir since 2007 and writes much of the music that the group performs. His Mass setting Misa Luna was sung for the 2015 papal liturgy in Philadelphia, for the 2017 beatification Mass of Blessed Stanley Rother in Oklahoma City, and is used in parishes and cathedrals nationwide. In 2021 it received the distinguished Mass setting award from the Association of Catholic Publishers.

NPM’s Executive Director, Jennifer Kluge, said, “What a pleasure it is to bestow NPM’s most prestigious awards on those who have not only impacted music and the liturgy, but continue to lead us in a dynamic and faith-filled Church.”

In its national press release NPM wrote, the Pastoral Musician of the Year award is given to an individual who exemplifies the best of  (NPM), one who has given substantial witness or promotion to the role of pastoral music in parish, diocesan, or institutional life. This year’s Pastoral Musician of the Year recipient is Peter Kolar. Peter Kolar is a bilingual composer of Salvadoran-Polish heritage who has contributed much to the liturgical music landscape of the U.S. His numerous works reflect a fluency in classical, folkloric and pop styles. A native of Detroit, MI, Peter holds the position of Editor for Spanish and Bilingual Resources at GIA Publications, Inc."

Peter shared his appreciation: “What a tremendous honor it is to be recognized as Pastoral Musician of the Year! I’m so grateful to NPM for the opportunity to have served over the years as one small piece of its vital mission. It is a privilege to be among a family of musicians so dedicated to their ministry and compelled by a love for the liturgy and the beauty it inspires. To be able to do make music for the glory of God and in service to the church is a wondrous gift we share. Thank you, NPM, for this distinction, and above all, for your unwavering commitment to the important work of music ministry.”

Peter is the talent behind the glorious music at Chrism Mass, ordinations, and special events in the Diocese of El Paso, including the Catholic Foundation's annual Foundation of Faith Event.

An accomplished pianist and recording artist, he has performed with some of the most prominent Catholic artists today. His solo piano CD “Variations,” recorded here in El Paso, showcases his formidable technical skill, though he is also very at home playing boleros on the accordion. He inspired and dazzled at Mass with Matt Maher in 2019, and will accompany Sarah Hart at Mass with Bishop Mark on Thursday, September 22 at St. Raphael Parish at 8:30 am, a kick-off event for the 16th Annual Foundation of Faith Event: Building the Kingdom.

Peter holds a Masters degree in music composition from Northwestern University. He lives with his wife Mariana and their two daughters in El Paso.

Photo Credit: Kolar was the pianist for the Beatification Mass for Blessed Solanus Casey at Ford Field in Detroit with over 70,000 in attendance.