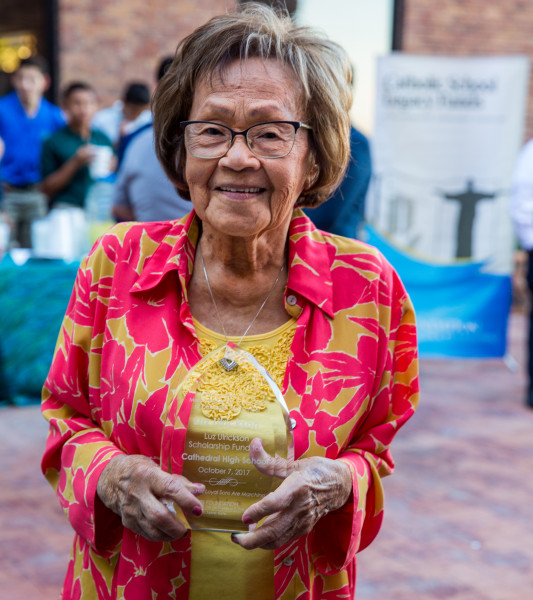 Luz Ulrickson, a longtime math teacher and tutor, passed away peacefully on Father’s Day at the age of 96.

Luz Ramos was born on May 24, 1926 in Catbalogan, Philippines. The oldest of eight children, she began her lifelong dedication to taking care of others at a very young age. In 1941, when Luz was in high school, the Japanese invaded the Philippines. There was a 2-year period when Luz and her family hid in an underground building and she was often left in charge of caring for her siblings.

Luz returned to school after the war and graduated from university. After that, she worked day and night to put five of her siblings through college—Luz worked as a tutor in the mornings, taught school during the day, and worked in the family store in the evenings.

She would go on to serve as a Catholic missionary in Pakistan.

It was during her time at university where Luz was one of two female engineering students that she was drawn to education and changed her major.

Luz arrived in College Station, Texas in 1964 to work on a Master’s Degree in Physics. During a trip to El Paso to visit relatives, she met Robert Ulrickson. Luz and Bob got married on July 24 of that year and she began teaching at Cathedral High School.

During her years at Cathedral, Luz always went above and beyond for her “boys”. She held tutoring sessions on the weekends in her home and cooked for the students to make sure they could enjoy a hot meal while they were studying.

Her love of Cathedral and its students spanned five decades, and Luz continued to tutor well into her 90's.

A group of Cathedral graduates wanted to do something for the math teacher who inspired them to be better men. In 2017, they established an endowed fund in the name of Luz Ulrickson so that her legacy would live on through scholarships for well-deserving young students who could not otherwise afford to attend Cathedral High School.

Luz Ulrickson had a zest for life and a passion for helping students. The family asks that you consider a gift to the Luz Ulrickson Scholarship Fund for Cathedral High School in her name in lieu of flowers.