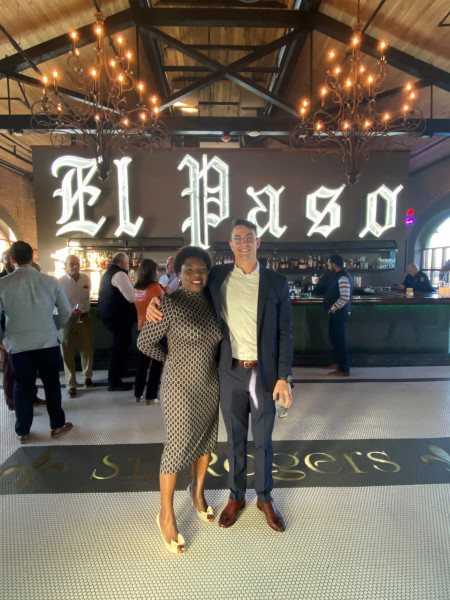 In 2003, a single mother named Shoshana Johnson was captured near the southern Iraqi city of Nasiriyah with six other members of the 507th Maintenance Company. Diego Lopez, a member of the Cathedral High School Class of 2006, wants to tell her story.

Educated, gracious, articulate, and perfectly bilingual in English and Spanish, Diego is a quintessential representative of Cathedral High School and the bicultural community that formed him.

After graduation, Diego took the next step as many other men in his class: he went away to university. As a regular on the musical theater scene, music seemed like a good fit and the right academic path for Diego. He accepted a full scholarship in vocal performance at the University of Arizona. But at U of A Diego met people who were studying film and that opened up doors that he did not know existed. He'd been making movies with his brother since he was a child but he just never dreamed you could study film making in college. Diego fell out of love with the notion of studying music and, after two years, he returned to El Paso.

The determination to pursue his passion would take him to the University of Texas at El Paso, the New York Film Academy in Los Angeles, involvement with acting, photography, and cinematography, Santa Monica College, and Cal State Northridge. He was taking classes, working 12-hour days as a film production assistant, shooting at night, and living on an hour of sleep for a long period of time, when a college advisor told him something the Christian Brothers might not have agreed with.

The advisor said, "Listen, the hardest thing about this industry is getting into it and you’ve already done that. If you’re learning more at work than you are taking classes, then you should just drop out of school.” Diego asked his advisor to repeat it three or four times. He left school for good in 2012 and he's been working as a film maker ever since.

In 2021, AARP was looking for a local cinematographer to shoot a 5-minute story about a veteran for Veteran's Day. Diego got hired because of his reputation and connections, and he was excited about the opportunity to come home. The story was about Shoshana Johnson, the first Black female Prisoner of War in the military history of the United States.


Captured in 2003 during Operation Iraqi Freedom, Shoshana was shot in both legs, badly beaten, and almost ripped apart by an angry mob. She was held prisoner in Iraq for 22 days along with five other members of her unit. The United States Marine Corps conducted a rescue mission on April 13, 2003 that saved her life. The mission itself is an unbelievable story of heroics, timing, and fate.

On the day of the AARP shoot, Diego arrived at Shoshana's house to set up the lighting. She welcomed him in and shared that she and her daughter were cooking for the crew. She looked like your next-door neighbor, not a person who had lived through a nightmare and had been suffering from PTSD. The director was running late so Diego spent time with Shoshana, asking questions and just letting her talk. He listened in awe, recalling that tears were unavoidable. He immediately imagined the incredible movie her experience would make. He was also racking his brain. "Did I hear about this Iraq War episode in school?" "Surely someone has made a movie about it." He couldn't query Shoshana for details once filming started. And after the shooting of the special segment was complete, he could not get her out of his mind.

He did research, read Shoshana's book, I'm Still Standing: From Captive U.S. Soldier to Free Citizen—My Journey Home, talked to his girlfriend about his encounter and the desire to make a movie, and decided to write Shoshana a letter asking if she would allow him to attempt to tell her story through the visual medium. She confirmed with an email in August of 2021 and Diego got to work. Three companies passed on the project. He couldn't find a writer. It quickly became apparent that if the film about Shoshana's life in the Army was going to be made, Diego would have to do it.

Diego returns to El Paso this month to begin filming. The short film is aptly called, "Grace". He's the writer, director, and producer. That means he's responsible for everything from raising money to hiring actors to overseeing the budget. The movie will be made in El Paso and will employ El Pasoans. He hopes to submit the completed film to every festival possible. Festivals are important platforms for marketing movies; they create awareness and visibility, and they showcase independently made films.

"I've condensed it into the most important moments and will create a 12-13-minute long 'trailer' for the bigger idea which is a limited series television show. I want to tell the story from different perspectives. Her story. The Marines. Iraqis who helped her. I'm interested in the endless wars in the Middle East and how I would feel if I lived there. There are conflicting points of view so I want to cover all sides of the story, including the Iraqi side. The film will leave open-ended questions."

The cost to make the short film is $20,000. Diego has created a GoFundMe called "Tell Shoshana Johnson's Story". He is close to halfway there. While it seems like a lot of money, to stay within budget he will have to be resourceful and watch every penny.

We will keep you updated on Diego's project. You can find also the story on the Catholic Foundation Facebook page.