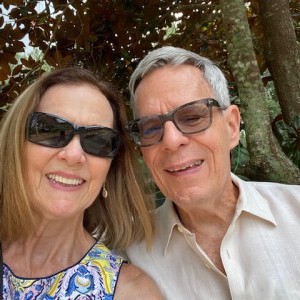 Tim said, “I made my bequest to Cathedral High School because I very much believe in the mission of providing resources to those who have not had the opportunities that I had growing up. When we were in El Paso for my 50th and saw the success rate of the Cathedral graduates, I was floored and decided to do what I could to help future students with needs become successful.”

Tim met Norma in 1972 and they got married the following year. He said luck brought them together but that when you choose your life partner, it works out because of much more than love and luck. He attributes compassion, forgiveness, support, patience, a little bit of craziness, enthusiasm, common interests and much more with getting them through 21 moves, too many adventures to count, and raising two children. They are now retired and enjoying a life of leisure in Florida that includes five grandchildren and one French Bulldog.

"I made my bequest to Cathedral High School because I very much believe in the mission." — Tim Ackert

One of seven children, Tim was a “military brat” and when his father was transferred to Ft. Bliss, he enrolled Tim at Cathedral for his last two years of high school. Tim tried college but says he bombed out and joined the military. He credits his three years in the Army with motivating him to get a good education and good jobs. One of Tim’s favorite sayings is, “They are able because they think they are able!” He discovered it after attending his 50th high school reunion and it reminded him of one of the lessons he learned when he left “La Cate”.

Tim attended Florida Technological University, now the University of Central Florida, where he received a Bachelor of Science in Engineering and went on to get a Master’s Degree in Building Construction at The University of Florida. He spent more than 40 years in project and construction-management, at one point serving as operations manager for URS Corporation, the country's largest engineering design firm. He worked on a new NBA Arena, a new MLB baseball stadium, the renovation of a major football stadium, multiple performing arts facilities, oil pipelines, refineries, gas plants, and offshore oil facilities in many faraway places including Saudi Arabia, Russia, Sumatra, Brazil, Norway, Korea, and Oman.

Tim credits his Dad and Cathedral for being his greatest influences and says his mother taught him to have an open mind.


Cathedral High School was founded in 1925 to offer a rigorous academic and value-based education for young men in the region. Although the school is owned and administered by the Diocese of El Paso, the Christian Brothers, a Catholic religious teaching congregation founded by Saint Jean-Baptiste de la Salle, have been involved in the school since its foundation. Cathedral High Schools turns 100 in 2025.